"Right this way, Mr. Goodridge. We've been expecting you." 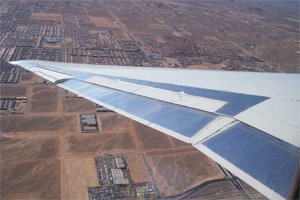 My second attempted escape from Las Vegas was, in a word, seamless. Traffic was cooperative. The doors were all open. There were no lines for check-in. Security check went quickly. The smiles were plentiful, and there was no crowd at the boarding gate. In the famous lyrics of Peter, Paul and Mary: "I'm leaving on a jet plane, don't know when I'll be back again...!" Next stop, San Jose, California for a layover before heading to Japan!