Of Food Coops and Impressions of Guam...Part 1

Just came back from Guam! Spent 4 days and 3 nights there at the palatial Leopalace Hotel! But let me tell you how I got there. Seems Zita Pangelinan of Pacific Human Resources was on Saipan last Wednesday and happened to pick up a copy of the Saipan Tribune which featured my article on Irene Lomosad.

Sensing that my brand of information would fit well with a 5 day workshop she was hired to do by the Navy Hospital on Guam, she tracked me down through Joe Hill, and another Pangelinan (Senator Frica), and gave me a call on Friday afternoon.
"I'd like to invite you to Guam to do a workshop," she says.
"When would that take place?" I ask.
"Monday," she replies.
"Allrightee, then," I reply.
So, long story short, I agreed, she got me a ticket that same day, and 48 hours later I was on a plane to Guam.
Before leaving, however, we had the first meeting of the Pacific Island Food Coop on Saturday evening. 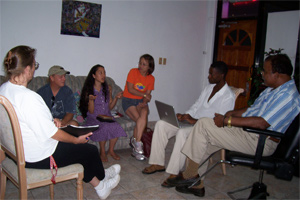 The founding members of the Pacific Island Food Coop gather for kickoff! 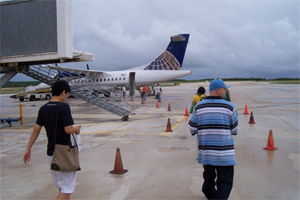 So, Sunday I'm off to the airport to head to Guam! 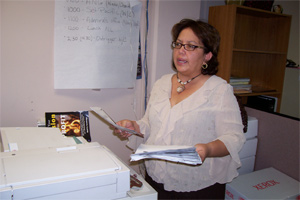 Zita picks me up from the airport, we run a few errands, get acquainted, make some copies for the next day's workshop, and then head to Payless Supermarket, one of the stores that Franicia White (one of the Food Coop's founding members) had told me has some organic, vegetarian selections (See Franicia's My Saipan Blog). What she didn't prepare me for was something that completely blew my mind! We get to payless, and there's an entire section devoted to vegetarian, soy, organic, even vegan food. I don't know if you can make it out in the picture below, but those five banners on the wall r ead "Vegetarian" "Organic" "Vegan" "Soy" and "Dairy-Free." Now, I mean no disrespect to the consciousness of the other pacific islands, but this is the first time I've seen the word Vegan uttered or displayed by someone other than myself since I've been on this side of the globe! Go Payless! 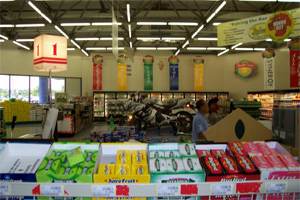 Happier now than a pig in slop, it gets even better! As I approach the frozen bread section, my heart starts to pound. I catch a glimpse of some familiar colors through the glass door and, as I open it, angels begin to sing, rockets start bursting in air, violins chime in, and a heavenly light emanates from the bottom of the freezer. To my astonishment and elation, Payless Supermarket in Guam carries Ezekiel 4:9 Breads and tortillas! 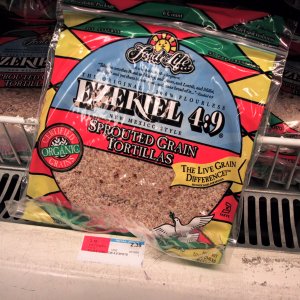 Now that little tidbit of information may not mean anything to you people, but I had to explain to Zita, the payless management, and a few curious Japanese tourists, why I was doing backflips, salivating and eventually why I purchased all 12 packages of b read to take back to Saipan with me. Only another vegan in this part of the world would understand. In any event, now that Guam has achieved a few brownie points as a possible place for this nomadpreneur to live, we head out to another little event a few miles down Marine Drive. We stop at a bar owned by Zita's sister (shown here) 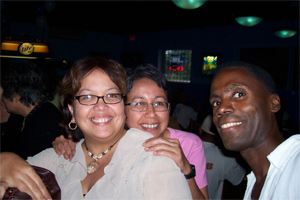 and the sister's business partner (shown here) who are celebrating the bar's 1 year anniversary! 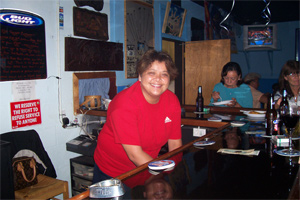 Then we head to the LeoPalace Resort, Zita helps get me checked in, and I call it a night! 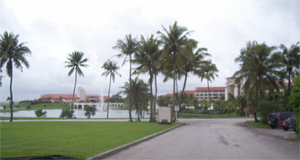 I'll tell you all about the workshop for the Navy next time!