Off to a great start!

After clearing customs, I was greeted by my host Joe Hill, a successful lawyer on the island whom Ken had introduced me to by phone back in December 2005. I've since come to learn that Joe is perhaps the most knowledgeable and most qualified person to show me around my new home. Originally from Oklahoma, and an alum of Pepperdine University, Joe has lived all over the US, Alaska and Japan, and has been on the island now for over 30 years. At some point, through both his practice and personality, Joe has come to know practically everyone on the island. (As both testament to his local fame, and perhaps too, the size and culture of the island, he's been known to receive mail from all over the world addressed simply "Joe Hill, Saipan.")
Also there to greet me were Sam Joyner, a well-respected, well-traveled musician, and John Joyner, his brother, recently appointed Saipan's Director of Coastal Resources Office. 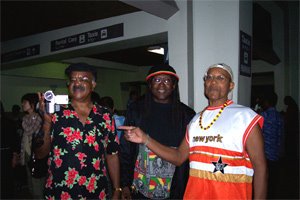 Joe Hill, Sam Joyner and John Joyner
Joe and I were up talking until about 3 in the morning. After a 3-hour sleep, we were up and about to see the island. First stop, Joe Hill's law offices! 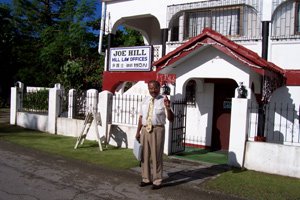 After the first of what would be many such mini tours of the island, replete with history and culture lessons, I found myself pulling up to one of the government offices on the island. Joe and the members of the African American Cultural Preservation Committee had been hard at work publicizing my arrival.
And so it came to be that within 48 hours of landing on the island of Saipan, I was meeting with Senator Maria Pangelinan and Representative Cinta Kaipat, and finalizing plans for a Passion Profit workshop while here in Saipan. 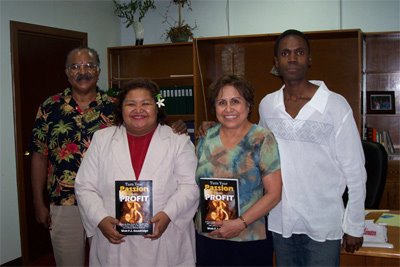 Joe Hill, Rep Cinta Kaipat, Sen Maria Pangelinan and me
Senator Pangelinan has the distinction of being the first female senator on Saipan. Representative Kaipat has a distinguished history of public servivce. Both have been active advocates of the rights and freedoms of Saipan's transplanted as well as indigenous citizenry.
A workshop is tentatively scheduled for March 11! Stay tuned!