My escape from America has begun!
It's now 1:00pm on Wednesday, February 15, 2006. I'm sitting on an ATA Airlines Flight bound to Chicago's midway airport --the first stopover on my way to Las Vegas.
Tell you a quick story. With a flight scheduled to leave New York's LaGuardia airport a little after noon at 12:15pm, I decided I had more than enough time to tie up a few loose ends around the city before I headed out. So, first I went to the 34th Street Post Office to send out some books to customers and to ship a box ahead to my final destination in Saipan. (P.S. Being a mail-order company, the fact that Saipan is part the US Postal system makes this whole nomadpreneur thing possible!) Then I headed down to the West village to pick up a copy of Tales from the Time Loop by David Icke. Figured I needed some good conspiratorial reading to punctuate my escape from "the system!" 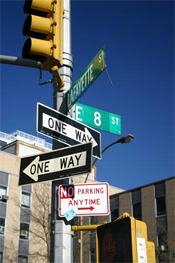 Now, don't ask me what I was thinking, but I fully expected the Barnes & Noble bookstore on 8th Street and 6th Ave to be open at 9:00am. Seemed like a fairly traditional opening hour for a New York business. Well, I got there at 9:20am only to discover that they wouldn't be open until 10:00am. Drat! So I walked around the village in the hopes of finding another B&N or other bookstore that would be open earlier. I found the Astor place store, but it too would open at 10:00am. No luck. So then I walked over to Broadway and up to 13th Street to Strand Bookstore, but they didn't carry any of Icke's books. So then I walked up to the 14th Street Virgin megastore, but struck out there as well. Finally I ended up back at the 8th Street B&N. It was now 9:50am. So I waited outside for the ten minutes until the security guard opened up at the stroke of 10.00am. I rushed upstairs, grabbed the book from the shelf of the New Age section, and bounded back downstairs to pay for it. It was now 10:05am. With book in hand, I headed back uptown on the train to finish packing (yes I don't ever pack until the day of my flight), and then to catch the M60 bus to LaGuardia.
Well, I got back home by 10:30am. After throwing a few last-minute items into my bags, I ended up leaving my apartment at 10:40am. I trudged through the snow towards 125th Street with my two suitcases and a backpack which contained my laptop. But I wasn't done with my errands just yet. I still had to get some Aloe Ferox bitters from Watkins health food store on 125th Street. So, leaving my bags out on the sidewalk under the watchful eyes of two strangers I befriended just for that purpose, I rushed in, made my purchase, and came out in time to catch the bus. It was now 11:06am (Yes, I know my flight is at noon!)
The ride took a little longer than I had remembered.
When the bus pulled into the Central terminal, I disembarked, walked up to the counter, which was emptier than one would expect. (hmmm. wonder why?) And I sauntered casually up to the ticket counter attendant. She asked what flight I was on. I told her the 12:15 to Chicago, and she said,"Sorry, you missed it." (an obvious powerplay, or perhaps she actually didn't realize who I was). So, I used my Jedi Mind tricks to have her call the baggage handlers to ok the arrival of my bags (which of course they did). She then scolded me for getting there late. (It was 11:55am!).
She said,"Next time, you can't come this late, ok? (pause) I'm serious!" she added for emphasis.
I wanted to tell her,"Honey, if things go as planned, there WON'T be a next time!" But I figured this wasn't the appropriate time or place to get into that discussion. She then printed my boarding pass, and tagged my bags. Actually, I tagged my bags after she ordered me to help her. She then instructed me to run like I was in a race to Gate B-4 if I wanted to catch my flight, since I still had the security checkpoint to go through. (I wanted to invoke the O.J. Hertz airport visual, but again, thought better about it) where I cut the line thanks to a helpful gate attendant, got my bags x-rayed (twice; hmmmm you think they suspect something?) I kept having thoughts of them confiscating my property to sell on ebay, but pushed the throught from my mind.
I made it to the gate as passengers were boarding, showed my boarding pass, and made my way to seat 28D, the very last seat right before the rest room, and coincidentally, right behind a family with gang of babies who seem at once to be teething, purging, trampolining,
So here I sit, typing this to you, listening to Could You Be Loved by Bob Marley through my headphones, while being buffeted by the aroma of restroom excrement from behind, and baby diaper doo from up ahead. Ahh, but whose complaining? No one ever said escape would be easy!
Next stop: Chicago! Hmmm. Isn't that Oprah's hometown?